We became Official Photographer to Musical Theatre Salisbury (MTS) in June 2015 and the first production we were involved with was Evita at Salisbury Playhouse.  What a start we had as Evita was a big hit with the audiences.  We followed that by photographing their wonderful interpretation of Dickens' A Christmas Carol at City Hall, Salisbury the following November. 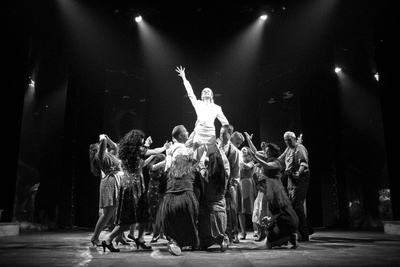 We have followed this in 2016 with MTS in Concert with Lesley Garrett, again at City Hall, Salisbury.  Next up is MTS's Christmas production of Annie in November.

The cast and crew of MTS are an incredibly talented group of people who put so much time and effort into their performances.  This is even more remarkable as all of the cast and crew have day-jobs too!

Being Official Photographer to MTS is an honour especially because back in my school days I really enjoyed drama and was a member of the London Bubble Theatre Company for a period of time.  Alas I never made it to the big stage however I get the chance to 'keep my hand in' by photographing rehearsals, dress & tech and backstage instead.