A Year In A Tesco Van: 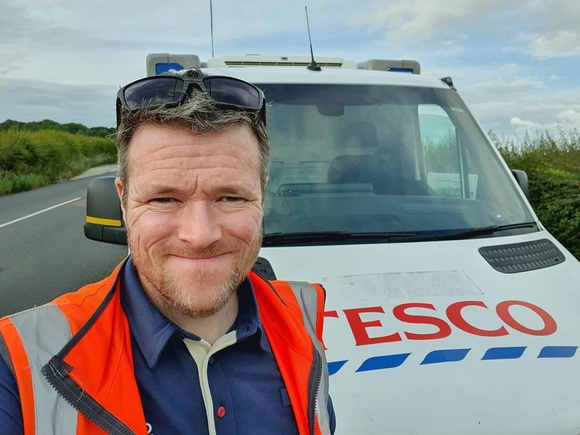 A Year In A Tesco Van

A year ago today (28th March) I started my “temporary” job as a Customer Delivery Driver at Tesco in Salisbury! With my self-employment having fallen off a cliff during March 2020 I decided that I wasn’t going to sit around and wait for something to happen, so I applied for one of the 20,000 temporary jobs which Tesco were advertising nationally to help them with the panic buying happening at the time.

I applied for the role online whilst the Tesco website was crashing under the pressure of so may people applying for roles. Three days later I had a call inviting me in for an interview, for an hour later(!), so I hastily got ready and off I went with my then three-year-old daughter for my first job interview in ten years (and Scarlett's first ever job interview).

So, all day on a Thursday and Friday plus 4 hours on Saturday and Monday evenings (and overtime) has seen me driving a 3.5 tonne 2 seater Merc (and the odd Iveco) around an area stretching from Tilshead to the New Forest, Sherfield English to Motcombe and everywhere in between.  All the while listening to an eclectic mix of Radio X, BBC Radio Solent, Spire FM (GHR Salisbury) and BBC Radio Five Live.  Doing this job has meant I’ve been very lucky to have had something to do outside of these four walls and the home schooling, meeting people and keeping active. I don’t think you can put a price on fresh air and exercise! Other people haven't been so lucky to be able to say the same. I’d have gone slightly mad if I had not had this job keeping me sane, that said there has been a few days where I’ve felt low, frustrated and irritable (what’s new some would say)!

I was joined by several other people, from many different backgrounds, all wanting to do the same thing including airline pilots, explorers, sound engineers, car salespeople, architects, DJs, driving instructors, students and loads of other people of all ages. All thrown together in a strange set of circumstances. Not to mention all the existing staff in Dotcom and instore who have worked longer through the pandemic helping customers than anyone else. So much has happened in a year including the three national lockdowns, panic buying, queues to get into the store, no face masks then mandatory face masks and now a vaccine programme. We have all had to adapt to a new way of life, however temporary or long term that may be.

I’ve delivered to so many people I know personally, as well as many people working for the NHS and other keyworkers some who have been working 12/14 hours shifts helping to care for the most vulnerable. I’ve also delivered to many people shielding, self-isolating, working from home, home schooling, furloughed or made redundant. Every single person has their own opinion of Covid and how it has affected them (sometimes some views have been stronger than others). Because traffic in the main has been very light I’ve been able to spend time chatting to people, asking how they are, and in some cases being the only human they’ve seen for ages. Many people reluctantly converted to online shopping in March 2020, but most will not go back to shopping in store when we get back to normality.

On my travels I’ve been joined by ponies, donkeys, dogs, cats jumping in the back and front of the van, cows causing me delays, fallen trees and experienced gloriously sunny days, torrential rain and freezing ice and snow. People have created "Tesco Trolleys", coloured their walls and doors with rainbows and stuck carrier bags outside their houses. Van breakdowns, recoveries, flat tyres, jump starts and the queue for McDonald's when it reopened! During the VE Day celebrations I remember we were clapped by people having parties outside their houses in Shrewton. Slightly embarrassing but humbling at the same time. Delivering to a campsite in the New Forest looking for a green tent was a challenge! I also remember a group of neighbours having a quiz on The Beeches in Salisbury and being asked if I could help with a couple of questions they were stuck on (on the QT of course)!

And, quite by accident, I have kept a photographic record of my time at Tesco, predominantly when in a van, showcasing the wonderful part of the world we live in and the four changing seasons. You can view them by clicking the link below. You could be forgiven for thinking that due to the number of images I’ve taken, I’ve actually made any deliveries at all! I think I’ll be at Tesco for a while yet and may continue doing a few hours a week long after normality has returned. I've been made to feel so welcome and the flexibility shown to me has been great whilst trying to manage a business and my Tesco hours. My photography business is my priority though and I’m looking forward to reopening the studio on 12th April and capturing all the weddings and events which were postponed from 2020. 📸 🤞